I hate Sacramento. OK, maybe this is because I got to spend a relaxing week in Santa Cruz, but still. I’m not happy about my return home y’all.

Seriously – when you enter Sacramento there should by a sign that says, “If You Lived Here, You’d be Miserable by Now.”

People are always sweaty because there is a constant, dry heat from the end of May to the end of September.

Everyone drives like shit. And I can say that because I have been on a few road trips and I swear to god, people actually know how to merge the moment you make it out of Sacramento. It’s like being freed from an enchantment of bad driving.

The level of unhappiness amongst Sacramentans is through the roof.

Actually, wealthy people are usually pretty happy here. That’s because they can afford big houses sans neighbors, great allergy meds, a really nice pool and a driver so they don’t have to worry about the traffic – they can just hire someone else to do it for them.

What is awesome about coming home from Santa Cruz? Well I got a sweet job that allows me to (gulp) leave my job at the mall.

I made this face when they told me: 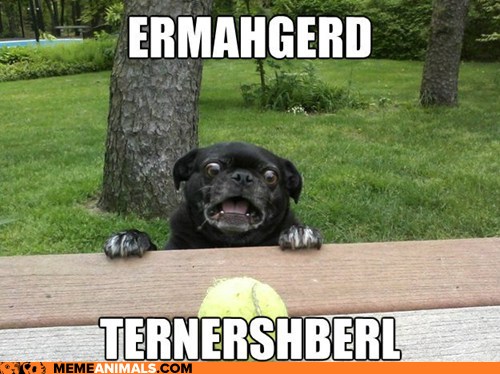 The job is the tennis ball. It’s a metaphor.

This means I will have nights and weekends and a job that I truly enjoy doing. But I think the picture says it all.

We also got a dog: 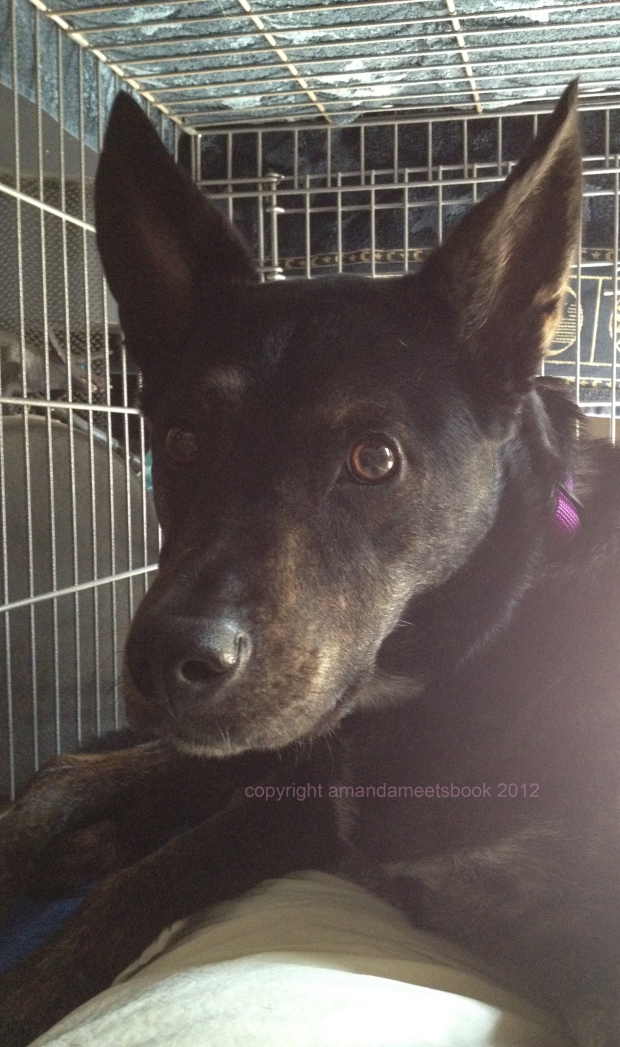 For anyone who is wondering: we have her in a crate because her previous owner trained her that way and it makes her a little more chill in her new environment. We want her out of the crate and solving crime throughout Sacramento as soon as possible, but it’s all about baby steps.

Also, apologies for not posting yesterday. I had to go to the doctor and get put on some meds and then I slept for 14 hours. Any post I would have produced in my brief moments of lucidity would have been not just awful, but unintelligible. So, really what I should say is, you’re welcome.

And what about books, Amanda?

Well, to be quite honest, I’m not reading any fucking books right now. Between being sick and taking care of the new dog I feel like my brain is going to melt out of my head. I’m serious – last night I watched three hours of TobyGames on Youtube. My brain is not in the mood for reading. Shit happens, you guys.

And if I had to pick a book to read it sure as shit wouldn’t be this one: 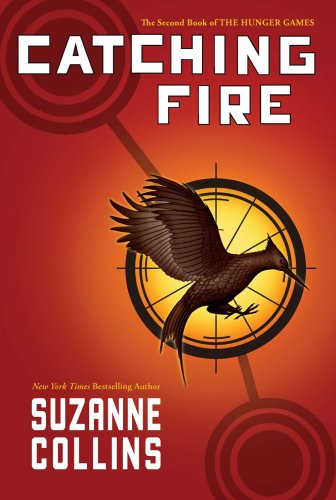 Awarded Best Sequel in the World by No One.

I tried reading this. I really did. It’s the only book I’ve ever gotten more than halfway through and then quit. Why did I do this? Because it’s the first book all over again. Here’s the deal – it starts off all original and I was all, “Shit Katniss, how you gonna get out of this, girl?” And then I was all, “Oh, because you’ll just go back in the arena and do the first book over again.” I would have given a heads-up about spoilers, but it isn’t a spoiler because if you’ve read the first book it already happened. So, I gave up on the series, and listen, I’ve had about a million people tell me I need to finish reading the damn thing and I’m just not going to do it. You fucked up, Suzanne Collins. You have fucked up.

And to be clear, I still stand by the fact that even though I think Catching Fire is shitty, if you love it and it gets you reading, well that’s awesome. Keep on reading and read what you want. I’m just a bitch with an opinion.

Bet you have a book you hate! Tell me about it in the comments and we can have a healthy discussion about terrible reads!