Here is what’s been happening: When Jeff isn’t home, or when it’s late and he’s sleeping, I hear the weirdest shit. And it’s not people shit, it’s beyond the grave shit.

It’s not of this mortal coil. You feel me?

Before I go any further, I just want to make it perfectly clear that I am the biggest skeptic in the world. Ever. You know that annoying dick in the horror/suspense/crime thriller movie who is always like, “He is clearly not the killer. Here are a bunch of facts that make a ton of sense and make me look like a snide asshole, therefore endearing the audience to you, Our Hero.” That’s me. I’m the rain on the parade. The wet blanket. The bummer. I was the kid at the Ouija board moving the pointer all over the damn place. To put it bluntly, I’m the dick. 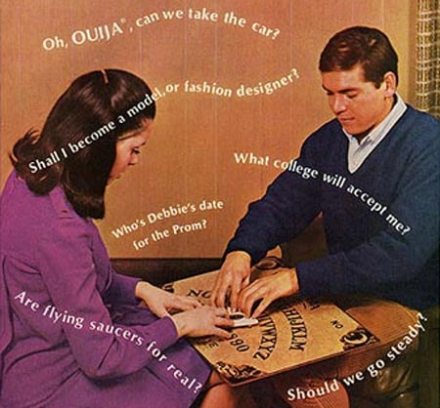 I’m the dick on the left, taking advantage of your belief in an afterlife.

So, the fact that I am spooked by the goings-on in my humble abode says something. Got it?

Now back to the shenanigans.

I was sitting on the couch, looking at blogs, fantasizing about living in a garden filled with puppies and cotton candy, and the floor moved. Then I heard a grunt. And let me tell you, there is no way the chunkay neighbor downstairs moved his ceiling/my floor. Maybe he grunted.

I keep hearing this weird wall scratchy noise at night coming from the kitchen. I think it’s my cat. I go to investigate. Nothing there.

Then, the creepiest thing of all, and I promise you this is no baloney, I heard footsteps on the kitchen floor behind me and thought Jeff was there, so I started talking to him. When he didn’t answer, I looked up and he wasn’t in the kitchen. He had been sitting in the bedroom the whole time wondering why I was talking to myself.

That’s a true story, you guys. And no, I’m not hearing things or going crazy. I feel like I can tell the difference between apartment noises and creepier than shit noises.

So, since Jeff is out at a bar, I won’t be reading this book tonight: The Prestige. I’m sure you’ve seen the movie with Christian Bale and Hugh Jackman, which I saw before I read the book. When Jeff told me I needed to read the book, I scoffed because I thought the movie was less than stellar. But the book, oh you guys, the book. Holy moly man alive. The book is so. damn. good.

What if the ghost knows I’m writing about it? What if I’m making it angry?